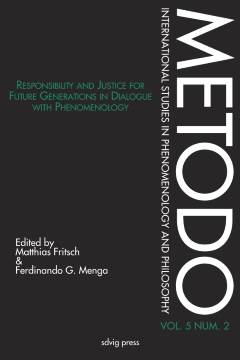 Any ethics directed to future demands is confronted with two main problems. Firstly, how can we conceive a kind of future which does not only hold the past and prolong the present, but remains open for something coming in an unexpected way (see Zu-kunft, a-venir). Secondly, how does it happen that demands of not yet existing people really concern us? This paper tries to answer to these questions from the perspective of a responsive phenomenology based on our responding to the Other’s demands which precede and exceed our own initiative. This intimates a sort of anterior future according to which we are permanently what we have to be. Leading concepts, supported by authors like Husserl, Schutz, Merleau-Ponty, Levinas, Marx and Nietzsche, are the following: generativity of life crossing the thresholds between different generations; procreation which allows for surviving in the children; projects of responsive politics and economics which take care to keep the world habitable; finally, a sort of tele-moral stimulated by Fernstenliebe which discovers traces of a future humanity in the face of the Other.