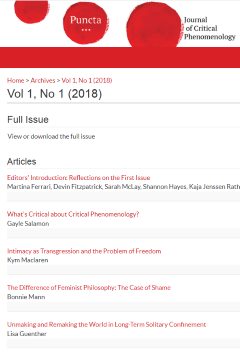 Unmaking and remaking the world in long-term solitary confinement

In The Body in Pain, Elaine Scarry analyzes the structure of torture as an unmaking of the world in which the tools that ought to support a person’s embodied capacities are used as weapons to break them down. The Security Housing Unit (SHU) of California’s Pelican Bay State Prison functions as a weaponized architecture of torture in precisely this sense; but in recent years, prisoners in the Pelican Bay Short Corridor have re-purposed this weaponized architecture as a tool for remaking the world through collective resistance. This resistance took the form of a hunger strike in which prisoners exposed themselves to the possibility of biological death in order to contest the social and civil death of solitary confinement. By collectively refusing food, and by articulating the meaning and motivation of this refusal in articles, interviews, artwork, and legal documents, prisoners reclaimed and expanded their perceptual, cognitive, and expressive capacities for world-making, even in a space of systematic torture.