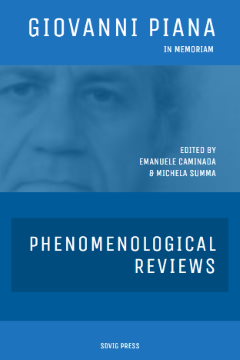 1. Overview2. The corpus3. The method4. The outcome

Materials for a lexicographic analysis of Giovanni Piana's Complete works

1With this paper, we release the full list of all words used in Giovanni Piana’s Opere Complete, ordered by frequency and tagged by grammatical categories.

2This list allows readers to reconstruct the frequency with which concepts were used by Piana, to recognize different synonymous terms, and to identify clusters of concepts related to specific areas of interest. An advanced search of the PDFs would suffice for the first goal (with the additional benefit of highlighting the occurrences, i.e. the sentences in which the words appear) but not for the second (in the sense that it would take much too long for such a preliminary enquiry).

3Moreover, the list gives a comprehensive view, across all books, of authors and concepts. For instance, one can identify the relative frequency of the scholars he quoted, such as ‘Husserl’ and ‘Heidegger’. One may explore the relative importance, across the whole body of his philosophical production, of concepts related to phenomenology, visual arts, music, and further fields one may not expect to be covered. A single quote may sometimes be all what is needed to define Piana’s position on a subject, but the total absence of reference is indicative.

4In addition to single words (more finely categorized in nouns, verbs, adjectives, adverbs and other grammatical categories), multiple words occurring together are covered (which in the jargon of lexicography are known as n-grams).

5In order to identify concepts, nouns and verbs that somehow connote Piana’s ‘specialized’ language, we release the top 30 000+ word and 87 000+ n-grams by keyness score, which reproduces how Piana deviates from the common use (frequency) of the word in standard Italian.

6In addition to these full documents,1 I provide, in a single text-only file,2 the full corpus of over 1 650 000 words for your further analyses.

7The analysis processed all the 29 volumes of the Opere complete, from their PDFs (all available at Giovanni Piana’s Archive at http://www.filosofia.unimi.it/piana/).

8Produced by Piana himself, the volumes in the Opere complete thematically organize, present, and collate 61 PDFs with separate articles and books. In three cases, the musical examples, which—with the multimedia capability of this digital format—can be heard, were eliminated for the printed edition, with some changes in the text. For this only reason, one book based on a university course that extensively used audio files integrated in the PDF was not included in the Opere complete.

9This book—Canto del merlo—has been included, however, in the present analysis, which only takes the text into account.3 In total, the number of pages published by Piana and covered by the current analysis is 6 648.4

10Since we are interested not only in the words but in the intention of an author, we did not include Piana’s translations of other authors, such as Husserl’s Logische Untersuchungen.

11The broad scope of the analysis mitigates the issue of a very selective view of his works: students may particularly well remember the course they attended but may have lost of sight what was published afterwards; scholars having loved a certain book may not be aware of other publications—and their relative material importance. People accessing physical public libraries are limited by their purchase decisions.

12That is exacerbated for the non-Italian speaking readers because, at the moment, only few papers have been translated. Indeed, lexicographic analysis is intended to facilitate future translations.5

13I imported the volumes into a specialized online service (https://www.sketchengine.eu/)6 and carried out pretty standard operations of ‘word listing’ and ‘key word extraction’.

14I reported the results in a spreadsheet, supervised the ranking and the organization of the materials. I separated the comparative analysis from the inner analysis of the sole corpus. In the latter, the columns ‘words’ and ‘nouns’ are unedited, to leave there any typos or hyphenation issue, since one of its possible uses is exactly to detect them, in view of a future new edition. Out of more than 1.5 million words, at low frequencies there is obviously such a phenomenon.

15Instead, a manual identification of typos and misallocation to the category has been carried out for the other columns (verbs, etc.). Inevitably, some subjective judgements had to be carried out and some inaccuracies do persist.

16Because of issues with grammatical attribution, in order to count occurrences it is better to use the ‘words’ column, while the categories column is useful for reasoning about areas of interest.7 The ranking (the relative ordering based on ‘larger than’ relations) remains the same in both columns.

17The comparative exercise broadly speaking identifies the single words and the sequence of words that Piana used more frequently than a reference corpus of more than 16 billions items of Italian language (called itTenTen16 – Italian Web 2016)8 The ‘score’ column reports the value of the keyness formula: the ratio between the relative frequency of the item in the Opere complete and its relative frequency in the reference corpus, modified by a smoothing parameter, for which we used the default value.9

25We invite the reader to dive into the two spreadsheet (GPiana-lexicon.xls which contains the analysis of absolute occurrence of single words, in general and by grammatical tag, as well as the n-grams; GPiana-distinctive lexicon.xlsx which contains the differential utilization of single words and 2-grams between the Opere complete and the standard Italian) for a personal inquiry.

26Looking for fil rouges and interesting comparisons is, however, well beyond the scope of this paper.10 I simply wanted to exhibit the width of a monumental philosophical work (cf. Complete Works).