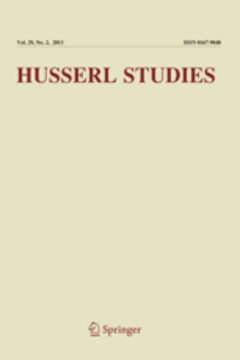 Possibility and consciousness in Husserl's thought

Clarifying the nature of possibility is crucial for an evaluation of the phenomenological approach to ontology. From a phenomenological perspective, it is ontological possibility, and not spatiotemporal existence, that has pre-eminent ontological status. Since the sphere of phenomenological being and the sphere of experienceability turn out to be overlapping, this makes room for two perspectives. We can confer foundational priority to the acts of consciousness over possibilities, or to pre-set possibilities over the activity of consciousness. Husserl's position on this issue seems to change over time. Ultimately, the establishment of a phenomenological perspective must involve a rejection of any hypostatization of pre-set possibilities, but not all implications of this theoretical step seem to be drawn in Husserl's texts. This paper is devoted to an illustration of how the phenomenological notion of possibility should change when we reject the hypostatization of possibility, that is, when we reject the idea that all acts of consciousness are to be conceived as realizations of pre-set "ideal forms". We examine this question, first, by trying to clarify the conceptual constellation of "possibility" in Husserl's texts. This leads to an overall classification of the features of constituted (ontic) possibilities. Then we distinguish such constituted possibilities from their constituting conditions, which outlines a different sense of "possibility". In the last instance two "possibilizing" dimensions (transcendental motivation and transcendental contingency) are shown to lie at the root of all ontic possibilities. This leads to a final suggestion on the nature of the relation between experience and possibility. Actual experiences create the room for possibility: they are possibilizations (Ermöglichungen). In this sense, experience is to be taken as a generative sphere which goes beyond the customary boundary between epistemic and ontological. From this point of view all experience is to be conceived as emergence .