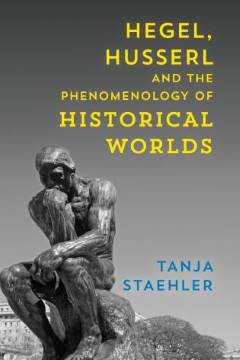 Hegel, Husserl and the phenomenology of historical worlds

GWF Hegel famously described philosophy as 'its own time apprehended in thoughts', reflecting a desire that we increasingly experience, namely, the desire to understand our complex and fast-changing world. But how can we philosophically describe the world we live in? When Hegel attempted his systematic account of the historical world, he needed to conceive of history as rational progress to allow for such description. After the events of the twentieth century, we are rightfully doubtful about such progress. However, in the twentieth century, another German philosophy, Edmund Husserl, attempted a similar project when he realised that a philosophical account of our human experience requires attending to the historical world we live in. According to Husserl, the Western world is a world in crisis. In this book, Tanja Staehler explores how Husserl thus radicalises Hegel’s philosophy by providing an account of historical movement as open. Husserl’s phenomenology allows thinking of historical worlds in the plural, without hierarchy, determined by ethics and aesthetics. Staehler argues that, through his radicalization of Hegel’s philosophy, Husserl provides us with a historical phenomenology and a coherent concept of a culture that points to the future for phenomenology as a philosophy that provides the methodological grounding for a variety of qualitative approaches in the humanities and social sciences.